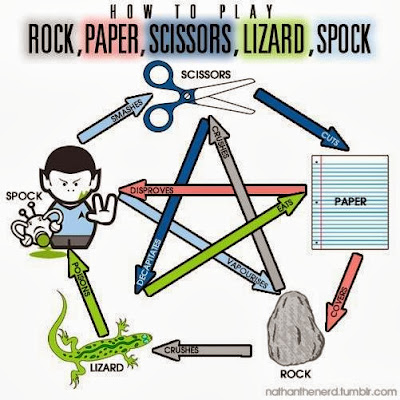 This confused the hell out of me at first, but seeing it like this makes it easy to remember.
Arrange the objects in a circle, in the order of the title, Rock, Paper, Scissors, Lizard, Spock.
Each item beats the next one item on the circular list. Is defeated by the one after that, defeats the next and defeated by the last.
I have no idea what the hand movements are for lizard and Spock!
Posted by Stephen Rainsbury at 11:42 No comments:

Email ThisBlogThis!Share to TwitterShare to FacebookShare to Pinterest
Labels: Humour

This is amazing. Hagai Davidoff has developed a unique system for controlling the Virtual orchestra on his computer using his right hand to play the notes and left hand, through a Leap Controller, to select the instruments being played.
In this excellent Video he is using the Leap controller with GECO to control the instrumentation and articulation of Albion 1, an Virtual Orchestra, but I could write about this for hours, just watch it and let me know what you think.
Ok I can't get the youtube video to link properly so for now, go to http://www.youtube.com/watch?v=TjF8JN5aVfc#t=433For me this is the next logical step in playing music and I am going to be thinking very seriously how I could use this in my set up.

Electronic "Drum Machines" started to appear in the late 1960, sometimes as stand alone units but more frequently built into a home organ. These had intriguing preset patterns such as "Bossa Nova" and "Beguine" but rarely "150Kg neanderthal on two pints of Stella" which would have been far more use to the the contemporary musicians.
The market really took off in the mid 1970's largely due to Roland, initially with their CR-78 as made famous by Kate Bush and Phil Collins, and then their monster TR-808 which was used by just about everybody.
The trouble is that as good as they were, they still didn't sound like real drums, until Roger Linn introduced his "Linn Drum 1" with its carefully made 12 bit samples. Even this was not perfect but at that time drums were normally quite heavily treated so Joe Public was fooled for most of the time.
During the next 25 years Drum machines enjoyed various success, as the quality got better and cheap machines, such as the Roland TR-606 found their way into teenagers bedrooms fueling the embryonic Drum'n'bass sound.
Now days most studio musicians use software to create their drum and percussion sounds, and very good they are too, but not exactly as fun or intuitive as a hardware box.
PICs lend themselves so nicely to controlling electronic music instruments and I am sure that many of us have though about using them to them to actually generate the sound, but In this article Catmacey shows he he actually did it.
He has used one of the newer PIC devices to make his own, and damn fine it looks too. He goes through the design process which lead to his choice of device and details how he turned the early prototype into a work end product.  Its a fascinating article which can be found at http://catmacey.wordpress.com/2013/08/20/drum-machine-progress-from-prototype-to-version-2/ 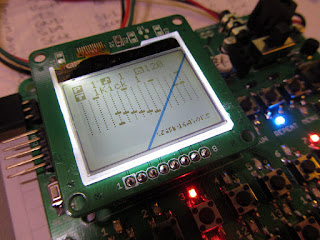 On a personal note I would love to build one of these as a project, but not just to get a new drum machine.
For that I use a Raspberry Pi. Yes you would have to make a GPIO connected switch board, but that's not hard. The sound system is already complete, with software drivers readily available, For a display I would probably use a a larger, color, 7" VGA display from amazon, and storage storage could either on the built in SD card or external USB device.
But lets not detract from what Catmacey has done here, its a really nice project.
[Via  http://www.embedds.com/drum-machine-2-0/]
Posted by Stephen Rainsbury at 12:07 No comments:

A trawl through Hack A Day lead me to this article about protecting the copper tracks on DIY PCBs using spray polyurethane varnish.
As normal the products are not available here in the UK but there is something very similar in B&Q. Personally I use Games Workshop's "'Ard Coat" which seems to do the job nicely.
For full details go to http://www.digitalunderpants.com/polyurethane-for-protecting-one-off-pcbs/
[Via Hackaday]
Posted by Stephen Rainsbury at 23:34 No comments: