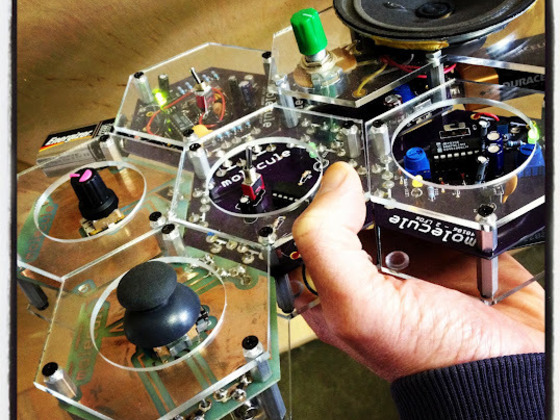 A fascinating idea where individual physical synthesizer modules can be plugged together, like Lego blocks, to make unique musical instruments.
Go to http://www.moleculesynth.com/ for full details.
Posted by Stephen Rainsbury at 03:21 No comments:

Email ThisBlogThis!Share to TwitterShare to FacebookShare to Pinterest
Labels: Music

"BigDog handles heavy objects. The goal is to use the strength of the legs and torso to help power motions of the arm. This sort of dynamic, whole-body approach to manipulation is used routinely by human athletes and will enhance the performance of advanced robots. Boston Dynamics is developing the control and actuation techniques needed for dynamic manipulation. The cinderblock weighs about 35 lbs and the best throw is a bit more than 17 ft. The research is funded by the Army Research Laboratory's RCTA program."
-------
BigDog is a military grade all terrain robot that cay carry several hundred kilos of kit over rough terrain, amd easily keep up with a human. They are hoping that it will be used in places like Afghanistan to carry addition kit, water and munitions to soldiers freeing them up to concentrate on fighting and staying alive.
There have been all manners of rumours surrounding the project, such as it can be modified to carry a human, either like a horse or a casualty on a stretcher, or even be fitted with weapons that it can fire on command or autonomously. This fits in the the idea that one could be set of by itself to re-supply soldier several miles away without the need for a human operator. This could either be done by a remote pilot, like a predator drone, or even using AI.
It was already scary but the thought of an autonomous mobile missile platform, with machine guns wandering around the place is getting a bit too close to SkyNet. At least the T800 didn't start throwing masonry at you!
Posted by Stephen Rainsbury at 03:06 No comments:

Email ThisBlogThis!Share to TwitterShare to FacebookShare to Pinterest
Labels: Robots

This is such a simple, yet Genius idea from Makezine.
If the plug is tip down the ball shorts out the tag to the tip and the main body, but tip it back and the ball rolls backwards breaking the circuit. Brilliant :-)
For full details go to http://blog.makezine.com/2013/02/25/how-to-phone-plug-tilt-switch/
[Via Make]
Posted by Stephen Rainsbury at 03:06 No comments:

A tidy little project from HWMayer that converted a standard Bass drum pedal into a controller for the Alesis interface.
Most of the mechanical bits came from pedal itself, while the electronics is nothing more than a variable resistor, some wire and a connector.
For regular live use you could enclose the whole thing in a die-cast box, held in place by the aluminum plate used here, and use a standard 1/4" Jack.
Go to the original article for full details.
Posted by Stephen Rainsbury at 00:34 No comments: