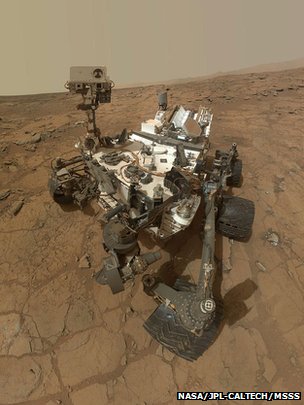 From the BBC:
"Nasa's Curiosity Mars rover has been put into "safe mode" after a computer glitch caused by corrupted files.
The robot, which is analysing rock samples on the Red Planet, is now running from a back-up computer.
Nasa engineers are looking into possible causes for the files on the robot's flash memory being damaged.
The fault means the rover's work has been put on temporary hold while the back-up computer is reconfigured so it can take full control.
"We're still early on in the process," said project manager Richard Cook, in an interview with Space.com.
"We have probably several days, maybe a week, of activities to get everything back and reconfigured."
The rover has been running on the back-up computer since Thursday"
For full story go to http://www.bbc.co.uk/news/technology-21654308
[Via BBC]
Posted by Stephen Rainsbury at 22:18 No comments: Several years ago I bought a copy of the book "K450 PVC Rocket Engine Design and Construction", which had to be imported from the US. It shows you, in extremely easy steps, how to build a K450 (very powerful) rocket motor which can lift reasonable sized payloads far higher than commercial "model" rocket motors, however there were several problems that stopped me from making one.
Firstly you can't easily buy the chemicals needed to make this in the UK. You can try to extract it from weedkiller, but in the UK this is mixed with a chemical that stops it exploding so it can't be used to make bombs, but that also stops it being used for rockets.
The second problem is that there is nowhere here, in South East England, that I could safely let one off and expect to get it back. It would be dangerous on public access land and farmers do get a tad feisty when attacked by rockets which are twice the size of a shoulder mounted anti-tank missile. I suppose I could launch it out to Sea but then I have the pain of trying to recover it so I would need either a fast boat or a search a rescue drone first.
But the final hilarious issue was that HM Customs and Excise were notified by the US Government that I had bought this book and I had to sign an import form for it, so somewhere I am on a list and if one turns up embedded in somebody's roof then the Rozzers might well be round here first!

I had forgotten all about this but today I noticed this article on Hack A Day, which leads to "Richard Nakka's Experimental Rocketry Web Site". Richard has developed the use of Sorbitol as an alternative rocket propellant may overcome the problem with getting the right chemicals in the UK.
What I didn't expect was that his website is an absolute treasure house of articles about making experimental rockets, most of which he has written himself.  It must have taken years to amass this information so hats off to you Richard, I am looking forward to getting a cup of coffee and a doughnut then spending an afternoon going through your work.
[Via HackADay]

Update: The Sorbitol replaces the sugar, not the weedkiller, so its not really going to help. Shame.
Posted by Stephen Rainsbury at 11:31 No comments: