From Make "With all the microcontrollers and single board computers on the market, sometimes it’s hard to see all your options. That’s why we made up this quick reference sheet for the 8 most popular boards we sell in the Maker Shed. This handy chart (which we lovingly refer to as the “Grid”) shows the speed, processor, memory, I/O pins, available kits and more to help you make a quick distinction on what board you need for your project. We’ll be keeping this list updated so bookmark it now for future reference! "

Full details at http://www.makershed.com/Articles.asp?ID=302&Click=127972
Strictly speaking this is a comparison of Microcontroller boards, not the actual microcontrollers themsleves, and being Make they don't mention the MicrochipPIC, which is a shame as it has a wide range of devices in hobbyist friendly DIP packages, but when it comes to completed boards it is still pretty much a one horse race for the Arduino, so your real choice is still just which one.
Posted by Stephen Rainsbury at 13:09 No comments:

From Make " This looks intriguing, the Paragon, an Arduino motor controller designed to be robust enough even to control an electric car, evidently designed to run a Power Racing Series car. The maker, Alex McLees, is a founding member of Madison, WI hackerspace Sector 67. [via PPPRS]"
At first glance I thought that this was not going to be of nay interest to me, but I am starting to get intrigued by the idea of making a device somewhat similar to a Segway, and this could be ideal. Unfortunately it only seems to be available as a commercial product and not something you can make yourself, and I can't see any prices.
Mind you it might have been popular with people building contestants for "Robot Wars"
Posted by Stephen Rainsbury at 12:58 No comments: 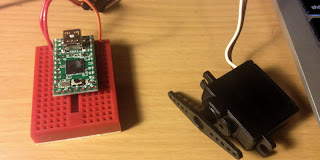 Ableton Live is a software package that was originally used for live Music performance, and it is extremely good at what it does, however this builder wanted to take it one step further and use it to control a servo too. The mind boggles. Perhaps he is going to make a smaller version of "Commpressorhead" with Lego or better still Meccano?
However he has kindly provided full hardware and software details of this project on his blog at  http://little-scale.blogspot.co.uk/2013/01/control-small-servo-motor-from-live-via.html
Posted by Stephen Rainsbury at 12:48 No comments:

"Pinoccio is a complete ecosystem for building the Internet of Things. It’s a wireless, web-ready microcontroller with WiFi, LiPo battery, & built-in radio, and an API to get your board talking to the Web right out of the box. It’s also Arduino-compatible, meaning you can use the Arduino IDE to program the board, just like you would with an Arduino Uno or Mega"
See http://blog.makezine.com/2013/01/10/open-hardware-pinoccio-is-a-wireless-web-ready-microcontroller/
Posted by Stephen Rainsbury at 12:39 No comments:

I found this on Make and originally thought it was probably about keyboard size, but in fact its almost a meter across.
It was originally used to create music which in turn is analyzed by a computer to project evolving images of 3D worlds on on a screen in front of the performer. Have a look at the video at http://arboration.com/ to see what I mean.
Once I realized the size I started to imagine how it could be used for live musical performances, for example by a singer to control a computer synthesizer.
Images of Kraftwerk and their drum pads, and Jon Anderson, formerly of yes, playing bass pedals by hand during "Starship Trooper" came straight to mind. Could Linkin Park use it to trigger the synth sounds at the start of "Numb"?
The website shows that the pads are just connected directly to an Arduino, but doesn't give any details of the circuit or software, but it could be fun
[Via Make]

Posted by Stephen Rainsbury at 12:34 No comments: