Build your own RC Car using Lego, an Xbox Controller and a Raspberry Pi If like me you firmly believe that there is no upper age limit on Lego (Note that it is LEGO not LegoS) then have a look at this article http://blog.zephod.com/post/37120089376/lego-xbox-raspberry-pi
The author, Tom Rees, built a working Radio Controlled car using a Raspberry Pi to control some old style Lego motors through a couple of Ada fruit interface boards.
In practice you could probably buy a couple of Lego Nxt motors from e-bay for less and hack them around instead, but hey where is the fun in that? Er.. lots probably.
Either way have a look, its always good to see how other people hack problems.
Posted by Stephen Rainsbury at 00:13 No comments:

From the Maker shed: "Hexy the Hexapod from Arcbotics is a fully articulated hexapod robot kit. Hexy has six legs, 19 servo motors and is powered by Arduino. It makes complex robotics lest costly, easier to learn with the full tutorials and documentation, while being radically more fun (and cute!). At the same time its built with completely open source hardware and software, making discovery and extension as easy as building it in the first place.
Use it to learn advanced robotics concepts like inverse kinematics, or use pre-built code to have it march to your bidding. Build it using the high-quality video and picture filled tutorials, and its ready to walk, play and dance with pre-built demos. Adding moves is as easy as opening a text file and following the tutorials, and moves are easily share-able as simple text files".
"Features
I quite like the idea of this kit, I could see myself spending ages making up all manner of robots, including maybe the elusive mono-rail that I have been fiddling with for five years, but at $250 I would want to compare it very closely to a large box of Lego technic first.

For full details go to http://www.makershed.com/Hexy_the_Hexipod_p/mkab1.htm?Click=37845
Posted by Stephen Rainsbury at 20:56 No comments:

From Make "MAKE Asks: is a weekly column where we ask you, our readers, for responses to maker-related questions. We hope the column sparks interesting conversation and is a way for us to get to know more about each other.
This week’s question: Some of the most buzz in physical computing for the last several months has come from the Raspberry Pi. What projects have you been working on using this board, or what are some things you’ve seen using this powerful prototyping platform?"

For full details go to http://blog.makezine.com/2012/12/04/make-asks-raspberry-pi-projects/
Posted by Stephen Rainsbury at 20:45 No comments: Issue 8 of the superb FREE Rasberry PI magazine MagPi is available now.
This issue contains articles on
Download this, and all copies of the MagPI,  from http://www.themagpi.com/
Posted by Stephen Rainsbury at 16:26 No comments:

Raspberry Pi: First Model A samples off the line! You might think that now the Model B has been upgraded to 512MB of RAM nobody will want the baby brother Model A, but the foundation are betting that's not the case.
The model A is cheaper $25, has far lower power consumption, due to the fact it has no Ethernet and only one USB connector.
While more than capable of running Linux, it is targeted for people who want a highly capable embedded system for fitting inside another device.
The theory simple enough, develop the software on another system, download it to the model A and close the lid, simples, as they say in Meerkat land.
In theory I could use a Model A  as a general desktop system. I already use a USB hub with my PI systems, so the missing port isn't an issue, and my next project is to get one working with a wireless dongle, making the Ethernet port redundant. However this extra kit costs more than the saving I would make by buying a model A instead of a model B, and only have half the RAM.
Right now I wouldn't buy one, if I wanted to embed a PI I would use one of my early model B boards and replace it with a later, 512MB RAM board.  Still I am sure that this lower power consumption and price will take the PI even deeper into Arduino territory and become the device of choice for many developers.
For the original blog entry go to http://www.raspberrypi.org/archives/2615
Posted by Stephen Rainsbury at 16:11 No comments:

BLE Shields in the Maker Shed: One-Tap Wireless Between Arduino and Cell Phones

From Maker "At the Open Hardware Summit just before World Maker Faire New York, Shawn Wallace introduced me to Chi from RedBearLab. Shawn knew that I’d developed a very healthy obsession with Bluetooth Low Energy; some time ago, Tom Igoe and Alasdair Allan clued me into the fact that it was not only a simple, low power communications option for Arduino and other devices, but it also avoids Apple’s requirement that you be in their MFi licensing program to do Bluetooth communications with an iPhone or iPad."

For more details see the Make blog
Posted by Stephen Rainsbury at 21:51 No comments:

Email ThisBlogThis!Share to TwitterShare to FacebookShare to Pinterest
Labels: Arduino

I have never wanted to try it myself, but I can see a situation where you might want a number of Arduinos to work together.
Over at the Geodesic Sphere they have come up with an idea using the UART feature and connected as shown in the picture. Its cheap, lightweight, easy to implement and doesn't need special connectors.
The fastest I have ever seen a UART operating at was around 110Kbits / sec so its not as swift as Ethernet or some of the other options and its definitely one way only but if that's all you need this could be an elegant solution.

More details from http://geodesicsphere.blogspot.co.uk/2012/12/daisy-chaining-serial-connections.html
Posted by Stephen Rainsbury at 21:48 No comments:

Email ThisBlogThis!Share to TwitterShare to FacebookShare to Pinterest
Labels: Arduino 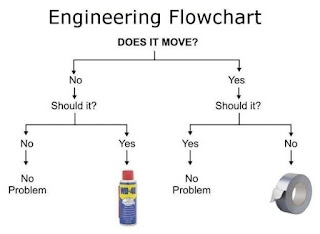 Posted by Stephen Rainsbury at 22:43 No comments:

Email ThisBlogThis!Share to TwitterShare to FacebookShare to Pinterest
Labels: Humour

SquareWear: An Open-Source Wearable Electronics Board "SquareWear is an open-source microcontroller board specially designed for wearable electronics projects. It is small in size, low-cost, simple to use, and provides an all-in-one solution for wearable electronics projects. It builds on Microchip’s PIC18F14k50 mcu, and comes with a few different colors and two battery options. The coin version has a built-in 20mm coin battery holder and measures 1.6″x1.7″ in size; the li-po version uses an external li-po battery and measures only 1.6″x1.6″ in size."

The board alone is $16.66,which at today's rates equates to £13.80 which I think is quite good for a self contained USB enabled micro controller.
Although this was designed for wearable electronics it is so cheap and small that I can see it being used in all manner of other application.
One that immediately springs to mind is fitting them under rubbery surfaces to be used as drum pads, or embedding them in old or cheap keyboards to add USB or even MIDI control.
If this had been around 10 years ago I would have built one into my model of the Millennium Falcon to control the flashing lights etc. I can imagine using it as the payload in a rocket or model aircraft, micro drone control, Ohh I am starting to dribble at the ideas. I can even see me putting one on the cats collar, although I have no idea why, except that he is Persian and likes cool things too.
If Father Christmas reads then this then one of these in a cracker rather than some crappy plastic comb would go down really well.

Full details and prices from http://rayshobby.net/?page_id=2686
Posted by Stephen Rainsbury at 14:48 No comments: