What is Public Laboratory?

"Public Lab is a community where you can learn how to investigate environmental concerns. Using inexpensive DIY techniques, we seek to change how people see the world in environmental, social, and political terms"

Why Balloons and Kites?

"These tools are being developed to provide a low cost, easy to use, and safe methods for making maps and aerial images. Over the last two years, we’ve built a global community of mappers who are engaged in discussion around the development and use of this tool and others.
Normally aerial maps are made from satellites and airplanes. The balloon and kite ground-based approach introduces an on-demand capability where events or environmental conditions are mapped at a specific moment in time. Our community is particularly interested in applying this to civic and environmental issues."
Click here for full details for how you can try this http://publiclaboratory.org/tool/balloon-mapping

Posted by Stephen Rainsbury at 18:33 No comments: 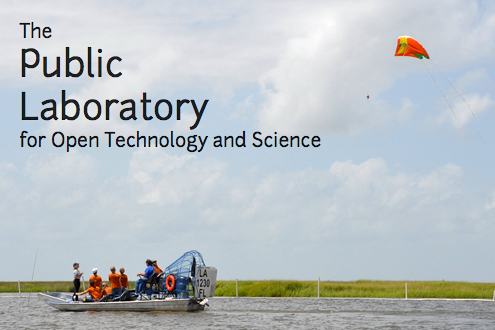 Public Lab is a community where you can learn how to investigate environmental concerns. Using inexpensive DIY techniques, we seek to change how people see the world in environmental, social, and political terms.
Community members develop tools and write open source instructions as research notes, wiki pages, printable guides, and videos, so others know how to use these tools, and many have started local groups in their area. We also provide support through our mailing lists. This works because everyone both learns from and helps each other out, and we all contribute to the growing body of documentation as we go.

This community began as the Grassroots Mapping project, an effort to produce Do-It-Yourself satellite imagery with balloons and kites, most notably during the 2010 BP oil spill. We are now broadening our scope to explore new inexpensive and community-led means to measure and explore environmental and social issues.

For more details of the Public Laboratory, go to http://publiclaboratory.org/home

Have a look over at Make magazine for a one of their projects using a Raspberry Pi for Aerial mapping. http://blog.makezine.com/2012/11/08/raspberry-pi-in-the-sky/
Posted by Stephen Rainsbury at 18:27 No comments:

Another totally bonkers project over on Make is from Moritz Simon Geist who has built a physical representation of the classic Roland Drum machine the TR-808.
Each of the boxes contains a real instrument, driven by solenoids, to mimic the venerable Roland box, all of which is controlled by a central electronics unit.
Apart from that I have no idea how this works so check out the full article at http://blog.makezine.com/2012/11/09/mr-808-brings-vintage-drum-machine-to-life/
Posted by Stephen Rainsbury at 18:17 No comments:

I found this brilliantly barking mad project over on Make "Kimio Kosaka soldered together quite a unique Arduino clone. The entire board is done freeform, with no PCB whatsoever. Based on a Metaboard, Kosaka designed and printed the layout in Eagle CAD. He used the printout as a template to bend steel wires into place to make the connections. Despite using a method that’s known for its delicacy, the final product looks surprisingly robust."

Find the original article over at  http://blog.makezine.com/2012/11/09/freeform-arduino-bliss/

Posted by Stephen Rainsbury at 18:10 No comments:

Quite amazingly I had two e-mails arrive today pointing me to the same site, one via the Scott Hanselman blog I mentioned earlier and another from somebody commenting on an article called "It's a good time to be an embedded systems programmer." which I posted a few weeks ago.

In that I suggested that t might be a year before the PI caught up with the Arduino in terms of hardware support, but I was wrong. You can buy a PCB that allows you to use Arduino shields with your PI so effectively it has already caught up!

There seems to be a library of support routines available so it shouldn't be too hard to put together a fully working system quite quickly, certainly faster than making designing your own PCB or laying it out on Veroboard and hand crafting your on software.

Its 40 Euros, which is more than some of the shields, but it is reusable so can be used again and again, so I can see it being a useful thing to have around. Even when hardware support for the PI builds up the Arduino has a heck of a lead and I doubt it will be overtaken for years, so I don't think it will end up in the bin any time soon.

One word of warning, I am sure I read that the first batch of Chinese Raspberry PIs had a different pin out to the current ones which are made in Wales. This has to make a difference, but I am not sure if this is a showstopper or just something to bear in mind.

Either way take a look for yourself at http://www.cooking-hacks.com/index.php/documentation/tutorials/raspberry-pi-to-arduino-shields-connection-bridge

Posted by Stephen Rainsbury at 00:04 No comments:

Scott Hanselman runs a terrific blog full of Raspberry Goodness over at http://www.hanselman.com/blog/.

Yesterday he published a list of terrific PI articles and projects that I had never heard of, some a bit esoteric, others I could instantly see a use for, either way if you are a fan of your own PI then go take a look, you won't be disappointed

Extract from the blog: "These are some exciting and fun projects for you to explore with Raspberry Pi that might make your Pi feel more useful and get you playing today!
For the full website go to http://www.hanselman.com/blog/ManyRaspberryPiProjectsHowCanYouNotLoveATinyComputer.aspx
Posted by Stephen Rainsbury at 23:35 No comments:

The Observer: Everyone wants a slice of Raspberry Pi 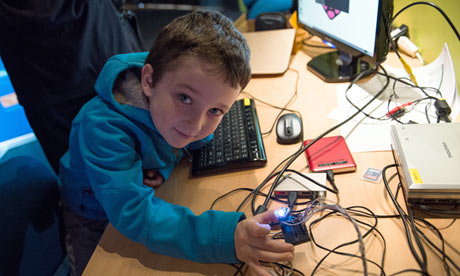 "The £25 programmable computer invented by British scientists has turned into a global sensation. Will it encourage kids to teach themselves code, or just end up in the hands of nerds?"
This is the question asked by the UK newspaper "the observer"  a good six months after the product became available to the public.
I found the article a little patronizing. The journalist doesn't show any real understanding, but that might be deliberate and it wanders through the normal middle England misconceptions and misunderstandings that seem to come with anything technical.
How many time have you come across people that think just because they can't understand something it must be really hard? If you try to explain its not that hard and the real problem is with the then you become labelled Nerd or Geek. I am happy with that, rather a Geek than an ignoramus.
If you found it via this website then there probably wont be anything new, but see what other people think about the PI at http://www.guardian.co.uk/technology/2012/nov/04/raspberry-pi-programming-jam-cern
Posted by Stephen Rainsbury at 17:06 No comments:

The Pi Plate features several goodies. It has a large prototyping area with "breadboard style" and "perfboard" style traces for chips, sensors, etc. Along the edges of the proto area, all the GPIO/I2C/SPI and power pins are broken out for easy connection. On the edges of the prototyping area, all of the breakout pins are connected to labeled 3.5mm screw-terminal blocks. This way you can semi-permanently attache wires, sensors, LEDs, etc. Finally, it has a SOIC surface mount chip breakout area just in case you need it."

At least they didn't call it a "shield", like they do for Arduino :-)
Posted by Stephen Rainsbury at 16:56 No comments:

I always though that my toolkits were full of useful junk, however an entry on the Make: blog made me realize that it is nothing compared to that of Adam "Mythbusters" Savage

This has to be one of the best tool kits I have ever seen, check out the full details in wired magazines article http://www.wired.com/design/2012/08/adam-savages-tools/
Posted by Stephen Rainsbury at 17:31 No comments:

Email ThisBlogThis!Share to TwitterShare to FacebookShare to Pinterest
Labels: Mythbusters

My Son ran into Jason Bradbury, off the Gadget Show, at the UK launch of Halo 4 and got him to make this early birthday present, brilliant :-)
Posted by Stephen Rainsbury at 17:27 No comments: